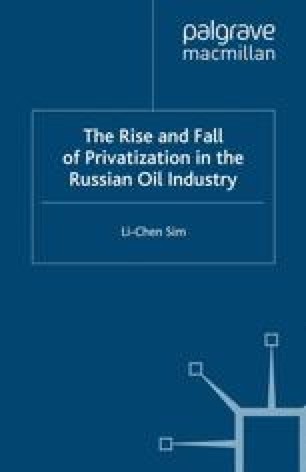 Accounts of the rise and fall of YUKOS typically begin with the collateral auction of December 1995, and the subsequent sale of these shares together with an investment tender a year later, which gave Khodorkovskiy’s Menatep group control of over 85% of YUKOS’s shares.1 However, this focus on Khodorkovskiy mistakenly ignores the significance of the preceding years when YUKOS was founded and corporatized. During this time, the key roles were played by former members of the nomenklatura, whose ability to shape the development of YUKOS was a result of institutional legacies and incentives, as well as of personal choices and preferences. In contrast, Khodorkovskiy played a key role in the actual privatization of YUKOS in 1995 and was also central to the YUKOS affair of 2003–2004.

State Bureaucracy Russian Bank Deputy Prime Minister Presidential Administration Auction Winner
These keywords were added by machine and not by the authors. This process is experimental and the keywords may be updated as the learning algorithm improves.
This is a preview of subscription content, log in to check access.