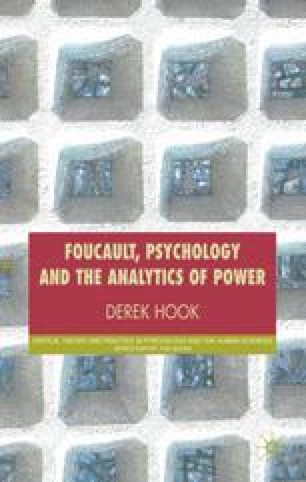 Foucault, Psychology and the Analytics of Power pp 178-214 | Cite as

The notion that space plays a vital role in informing practices of subjectivity and power has received much theoretical substantiation of late. Soja’s (1989, 1996) notion of ‘spatiality’ is perhaps the foremost example here, although, in differing ways, Bourdieu’s (1988) notion of the habitus, Fanon’s (1986) ‘Manichean divisions of colonial space’ and Foucault’s (1997) conceptualization of heterotopia all interestingly lend themselves to further explorations of the intersections between space, power and discourse. Each such perspective provides a prospective means of theorizing the relationship of subjectivity to the management of space, and the management of space to the broader ordering of a given social milieu. What is crucial about writings of this sort is that they alert us to the fact that there may well be a missing dimension in our analyses of social subjectivity, namely the component of space itself.

Crime Prevention Gated Community Public Realm Political Rationality Discursive Resource
These keywords were added by machine and not by the authors. This process is experimental and the keywords may be updated as the learning algorithm improves.

Space is fundamental in any exercise of power.

Cite this chapter as:
Hook D. (2007) Space, Discourse, Power: Heterotopia as Analytics. In: Foucault, Psychology and the Analytics of Power. Critical Theory and Practice in Psychology and the Human Sciences. Palgrave Macmillan, London. https://doi.org/10.1057/9780230592322_6