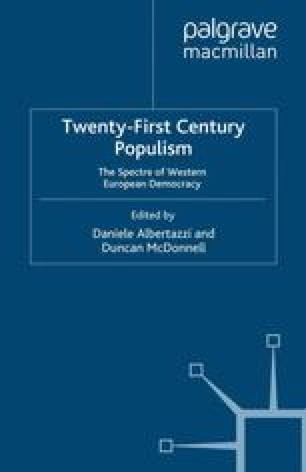 Italy: A Country of Many Populisms

According to some observers, populism found its ‘richest testing ground’, its ‘paradise’ in Italy in the late 1990s (Zanatta, 2002: 286). As Guy Hermet wrote, Italy ‘has transformed itself into the site par excellence of populism’s triumph over the classical parties’ (Hermet, 2001: 396). During the five years of the centre-right Berlusconi administration (2001–2006), composed of Forza Italia (FI), Alleanza Nazionale (AN), the Unione dei Democratici Cristiani e di Centro (UDC) and the Lega Nord (LN), the press has often stressed the populist character of the government and its policies.

European Union Prime Minister Pension System Direct Democracy Political Class
These keywords were added by machine and not by the authors. This process is experimental and the keywords may be updated as the learning algorithm improves.
This is a preview of subscription content, log in to check access.