IT and European Bank Performance 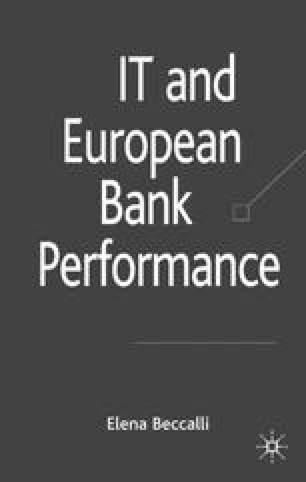 IT and European Bank Performance pp 16-41 | Cite as

Historically, investments in technology in the banking industry were effected initially as mere instruments for reorienting organisations towards the objective of achieving greater efficiency in traditional areas of activity (Fusconi, 1996). In the initial phase of automation the corresponding organisational initiatives were conceived for the most part in terms of maximising the outputs that could be obtained from the production function and did not involve a great deal of attention to the effects on costs (in particular, costs of a financial nature). In this way the expansion and the control of the volumes of deposits and loans constituted the fundamentals of the bank financial management. In fact, banks used information technology, on the one hand, to deal more efficiently with the information relating to deposits and loans, on the other, to transmit that information and process payments more quickly, all the while employing less resources. The effect of these initiatives at the organisational level was a rationalisation of the production process and a simplification of the work with a view to reducing the unit costs of production. A further effect related to the dimensions of the activity itself, in particular, in regard to the volumes of deposits and the payment instruments handled.

Credit Card Banking Industry Distribution Channel Wide Area Network Internet Banking
These keywords were added by machine and not by the authors. This process is experimental and the keywords may be updated as the learning algorithm improves.
This is a preview of subscription content, log in to check access.