Britain and the Origins of the Vietnam War 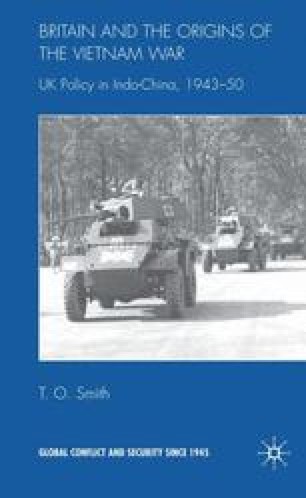 The origins of the Vietnam War are complex. The fact that over 30 years of conflict by the Vietnamese against Japan, France and the US has been overshadowed in the minds of the current generation of Saigon residents by the American war is unsurprising.2 Most of the literature available has tended to regard the Vietnam War as either primarily a US military involvement in the affairs of a small Asian nation, or at best as one element in the US global power game relating to the containment of the communists. Overt US military assistance to Saigon in 1950, in response to French requests for material assistance, has influenced what has been written and emphasised the situation that President Dwight Eisenhower inherited from President Harry Truman in 1953, rather than what Truman inherited from President Franklin Roosevelt in 1945. This emphasis deflected the difficult question as to precisely when the conflict began yet enabled the concept of a single war from 1946–75 to develop, but with two halves (1946–54 and 1954–75) providing continuity between the French and US periods. The British role in the origins of the war has been obscured and confused by the volume of literature now published on the bi-lateral nature of the US-Vietnamese conflict.