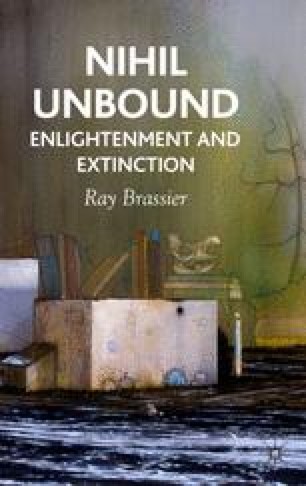 The Truth of Extinction

Nothing will have happened: Nietzsche’s ‘fable’ perfectly distils nihilism’s most disquieting suggestion: that from the original emergence of organic sentience to the ultimate extinction of human sapience ‘nothing will have happened’. Neither knowing nor feeling, neither living nor dying, amounts to a difference that makes a difference — ‘becoming aims at nothing and achieves nothing’.3 Yet Nietzsche’s entire philosophy is dedicated to overcoming this nihilistic conjecture. It is nihilism understood as the triumph of indeterminate negation, as assertion of the ultimate indifference or convertibility of being and becoming, truth and lie, reality and appearance, that Nietzsche seeks to vanquish by affirming the coincidence of being (identity) and becoming (difference) in a gesture that would simultaneously overthrow both their metaphysical distinction and their nihilistic indistinction. The instrument of this overturning and the focus of this affirmation are provided by the hypothesis of eternal recurrence, Nietzsche’s ‘thought of thoughts’,4 which is poised at that ‘mid-point’5 of (Western) history marking not only the culmination of European nihilism, but also the possibility of its overcoming.

Organic Life Protective Shield Manifest Image Ethical Sense Human Intellect
These keywords were added by machine and not by the authors. This process is experimental and the keywords may be updated as the learning algorithm improves.

Once upon a time, in some out of the way corner of that universe which is dispersed into numberless twinkling solar systems, there was a star upon which clever beasts invented knowing. That was the most arrogant and mendacious minute of ‘world history’, but nevertheless, it was only a minute. After nature had drawn a few breaths, the star cooled and congealed, and the clever beasts had to die. — One might invent such a fable, and yet he still would not have adequately illustrated how miserable, how shadowy and transient, how aimless and arbitrary the human intellect looks within nature. There were eternities during which it did not exist. And when it is all over with the human intellect, nothing will have happened.

Let us guard against saying death is the opposite of life; the living creature is simply a kind of dead creature, and a very rare kind.