The Reconquest Kings of Portugal 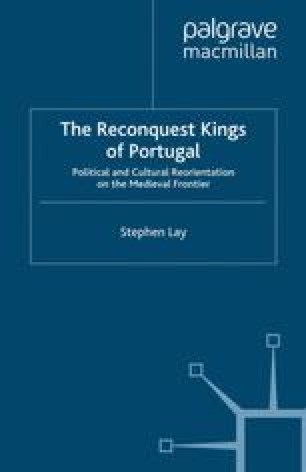 In 1179 the long campaign waged by Afonso Henriques to secure royal dignity was brought to a successful conclusion. The delivery of the papal bull Manifestis probatum by Pope Alexander provided the acknowledgement Afonso required to establish his royal status on the international stage, and guaranteed the transmission of that status into subsequent generations. Six years later, when the ageing King Afonso died peacefully at Coimbra with his ambitions fulfilled, the succession of his son Sancho I (1185–1211) to the Portuguese throne was unchallenged by either his own subjects or the neighbouring Spanish monarchs. Afonso’s achievement was an indication of the pervasive influence Latin culture had come to have in the peninsula and was also a testament to the skills Iberian leaders had developed in mediating that influence to their own advantage. The Portuguese campaign for papal favour had hinged on Afonso’s self-portrayal as a successful military leader against the Muslim forces of al-Andalus; however, once royal status was secured, there can be traced a clear shift in royal policy from attack to defence, from conquest to consolidation. This policy shift has traditionally been explained in terms of generational change: ‘The new monarch lacked the military gifts of his father,’ Joaquim Veríssimo Serrão suggests, ‘but he found the kingdom standing ready to accomplish a momentous act of resettlement.’1

Twelfth Century Portuguese Coast Atlantic State Palm Frond Final Decade
These keywords were added by machine and not by the authors. This process is experimental and the keywords may be updated as the learning algorithm improves.
This is a preview of subscription content, log in to check access.