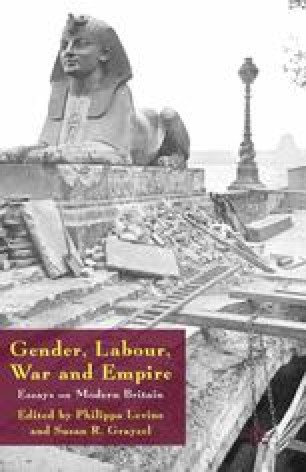 The Second World War introduced destabilizing forces that threatened to undermine gender and class hierarchies. Although the British home front used to be viewed as an example of total war generating social unity, historians now are more aware of the ways in which the war heightened gender and class tensions as the equal citizenship rhetoric aroused expectations inconsistent with gender and class structures.1 As a result, recent studies have focused on explaining how the wartime pressures for change were contained or diverted into less threatening channels.2

Woman Worker Labour Party Feminist Group Family Allowance Family Planning Association
These keywords were added by machine and not by the authors. This process is experimental and the keywords may be updated as the learning algorithm improves.
This is a preview of subscription content, log in to check access.