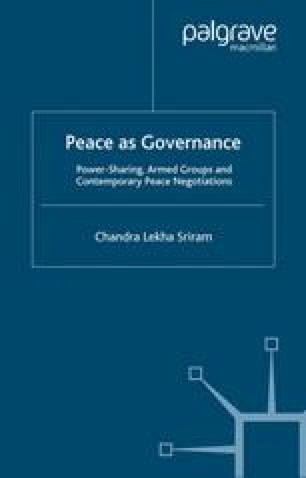 After decades of conflict, the war between the Sudanese government — the National Islamic Front (NIF), which seized power in a 1989 coup — and the Sudanese People’s Liberation Movement/Army (SPLM/A) reached conclusion in 2005. A partial peace accord has been signed, which allows for some degree of autonomy for the south of the country, as well as inclusion in both governance and security structures. Some degree of international security guarantee has been offered, but the accord is considered to be shaky, and it is unclear that implementation will proceed successfully. This skepticism arises in part out of the myriad failed attempts at resolving the conflict in the past. This chapter, based on field research in Sudan, examines the history of past negotiating rounds, seeking to identify the putative sources of their failure. I consider, though extensive interviews, what potential incentives have been of greater interest to the SPLM/A.

Security Council International Criminal Court African Union Peace Process Peace Agreement
These keywords were added by machine and not by the authors. This process is experimental and the keywords may be updated as the learning algorithm improves.
This is a preview of subscription content, log in to check access.