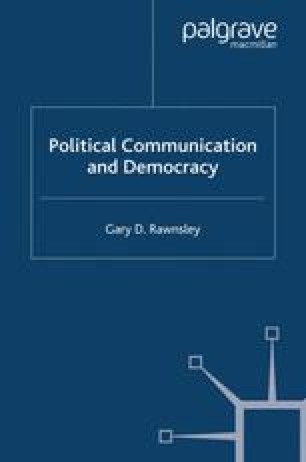 Shortly after delivering this speech in 1993, Rupert Murdoch decided to pull BBC World Service Television from the Star network’s AsiaSatl, depriving audiences in China, Taiwan and Hong Kong access to BBC programming. At the same time, Murdoch invested US$5.4 million into Renmin Ribao (The People’s Daily), the official newspaper of the Chinese Communist Party. His critics allege that Murdoch had taken this decision following official complaints from China about critical documentaries and references to the 1989 Tiananmen massacre in programmes made by the BBC. In short, the anecdotal evidence available leads us to believe that the Chinese government told Murdoch that either Star must conform to its idea of acceptable programming or the network would not have access to the lucrative mainland market. If true, then this episode reveals that even global media barons such as Rupert Murdoch are no match for the power of states determined to maintain control of media in their borders. In the battle between free market capitalism and politics, can we suggest that Murdoch’s alleged surrender to the Chinese demonstrates that politics is, to paraphrase Mao Zedong, ‘in command’?

Civil Society Political System Chinese Communist Party Political Communication Authoritarian Regime
These keywords were added by machine and not by the authors. This process is experimental and the keywords may be updated as the learning algorithm improves.

Everyone has the right to freedom of opinion and expression; this right includes freedom to hold opinions without interference and to seek, receive, and impart information and ideas through any media regardless of frontiers.

Advances in the technology of communications have proved an unambiguous threat to totalitarian regimes.