The History of Consumer Credit: Doctrines and Practices 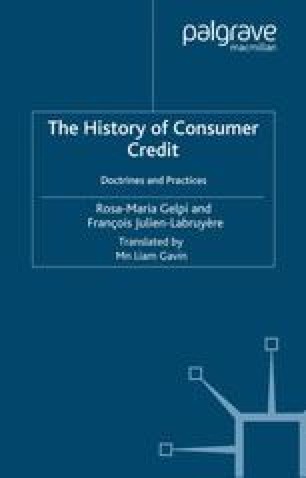 The History of Consumer Credit: Doctrines and Practices pp 169-176 | Cite as

Consumer credit, or its equivalent, has always been a central preoccupation of society: from ancient times, when it was one of the signs of the transition from the traditional clan system of gifts and barter to the first forms of urbanization, right up to modern times, and its role in Western industrial society as a corollary of the material well-being of households. Hence its importance in social and economic history, hence also its role in the history of ideas. Curiously enough, where there ought to be a concomitance between theory and practice, the subject has given rise to a millennary controversy. There seems to be a sort of social schizophrenia whereby the day-to-day indispensable practices of collective life are accepted on the one hand, while being condemned on the other, in the name of philosophical ideals. There can hardly be a more deep-rooted and widely accepted example of such a prejudice.

Credit Card Consumer Credit Credit Crunch Monetary Equilibrium Sewing Machine
These keywords were added by machine and not by the authors. This process is experimental and the keywords may be updated as the learning algorithm improves.
This is a preview of subscription content, log in to check access.