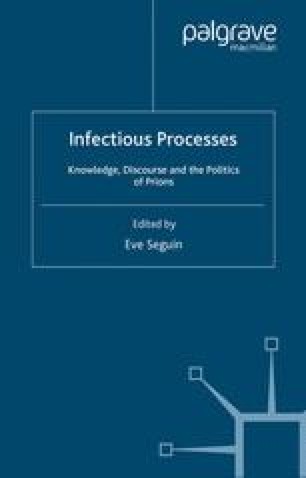 Since 1996 prions have become part of our language and cultural landscape, like microbes and other familiar if hidden causes. But for a long time prions had an air of scandal attached to them. They allegedly threatened established knowledge, especially that on the mechanisms of infection. The notion that the prion was a foreign protein that might self-replicate in the absence of nucleic acid, as postulated in Stanley Prusiner’s initial version of the prion hypothesis, was variously met with incredulity, anger, amusement or curiosity. In 1985, the discovery that the prion protein is manufactured by a host gene and exists in both normal and diseased brain might have led him to abandon his ideas or even to give up TSE research. Indeed, such a discovery may well have sounded the death knell for the hypothetical prions. But instead, Prusiner put forward that the disease-associated isoform of the prion protein is the infectious agent of TSEs as it converts the host normal prion protein into disease-associated molecules. He developed an ambitious research programme and worked on it for the next 12 years, joined in this task by a growing number of scientists. In 1997, prion research was formally recognized by the award to Prusiner of the Nobel Prize for medicine.

Infectious Agent Nobel Prize Prion Protein Foreign Protein Cultural Landscape
These keywords were added by machine and not by the authors. This process is experimental and the keywords may be updated as the learning algorithm improves.
This is a preview of subscription content, log in to check access.