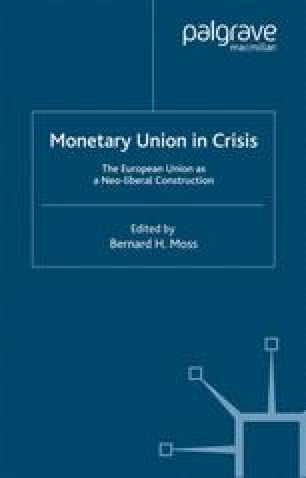 “Ordo-Liberalism” Trumps Keynesianism: Economic Policy in the Federal Republic of Germany and the EU1

For more than three decades, governments of the Federal Republic of Germany (FRG) have repeatedly been asked by their allies to stimulate the economy in order to improve international patterns of growth and trade, but the Germans have been reluctant to do so. They have consistently resisted international efforts to secure a Keynesian-style reflation, whether in the context of their domestic economy or as the strongest economy in the European Union. As mysterious as this stance appears to some observers, there are strong domestic precedents for their position. Even during the centerleft governments of Helmut Schmidt (1974–82) – the years of the German Model – and the center-right governments of Konrad Adenauer and Ludwig Erhard (1949–66) – the years of the Social Market Economy (Sozialemarktwirtschaft) and the so-called Economic Miracle – Keynesian ideas and policies were used sparingly in the Federal Republic. In fact, Keynesian policies were popular only for a brief period during the Grand Coalition (1966–69) and the early years of center-left government (1969–74) under Willy Brandt. Even in the wake of the slow growth in both Germany and the EU during the 1990s, the Red-Green government of Gerhard Schröder has not encouraged aggressive economic stimulus since taking office in late 1998. In fact, Schröder dismissed from his cabinet in early 1999 the one figure, finance minister Oskar Lafontaine, who was urging just such economic stimulus.

Monetary Policy Federal Republic European Central Bank Grand Coalition Social Democratic Party
These keywords were added by machine and not by the authors. This process is experimental and the keywords may be updated as the learning algorithm improves.
This is a preview of subscription content, log in to check access.