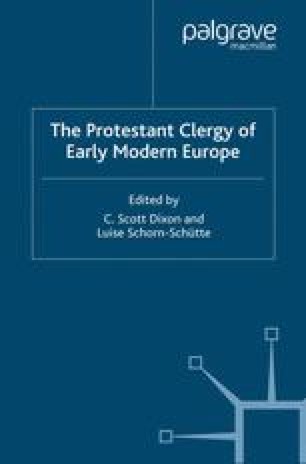 The Protestant Ministry and the Cultures of Rule: The Reformed Zurich Clergy of the Sixteenth Century

Early in the morning of 10 December 1555, Rudolf Hüsli, the minister of Töss, near Winterthur, was hauled from his bed and taken to the Wellenberg, a tower that stood in the middle of the Limmat river in Zurich. His offence, according to the officials, was to have traduced the position of the Zurich council in the matters of poor relief and the use of church goods.1 Although Hüsli’s imprisonment was brief, lasting only two days, the case became something of a lightning rod for the growing tensions between the Church and the civil authorities, particularly in the matter of provision for the rural clergy. Heinrich Bullinger held one of his regular interventions (Fürträge) before the Zurich council on 16 December addressing this very point,2 reminding the magistrates that it was their responsibility to ensure that each parish be provided with sufficient resources to maintain the church, a minister with the necessary tools of learning, the parish house, the school and the minister’s family.3

Sixteenth Century Pastoral Care Church Leader Catholic Priest Civil Authority
These keywords were added by machine and not by the authors. This process is experimental and the keywords may be updated as the learning algorithm improves.
This is a preview of subscription content, log in to check access.

Cite this chapter as:
Gordon B. (2003) The Protestant Ministry and the Cultures of Rule: The Reformed Zurich Clergy of the Sixteenth Century. In: Dixon C.S., Schorn-Schütte L. (eds) The Protestant Clergy of Early Modern Europe. Palgrave Macmillan, London. https://doi.org/10.1057/9780230518872_7