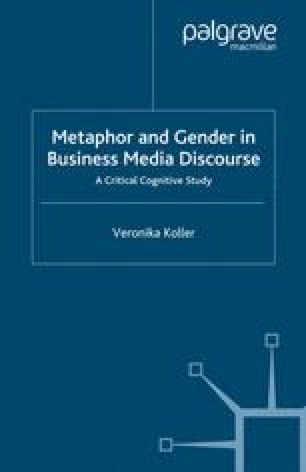 As we shall sec in the following chapters, metaphors are organized in chains across a text, involving other cognitive models such as frames and scripts. Such ‘chains provide “connectivity” so that a simple statement … tells us much more than is relayed by [the] words alone’ (Augoustlnos and Walker, 1995, p. 42). Moreover, metaphor also organizes the interpersonal relations between discourse participants, by virtue of being embedded in a ‘communicative complex that surrounds and supports individual metaphors’ (Eubanks. 2000, p. 8). By using particular metaphors, writers can therefore define a topic, argue for that conceptualization and persuade readers to share in their metaphor and thus relate to them. In short, metaphor is ancillary In constructing a particular view of reality. In doing so, It also serves an ideational function. This hook Is, in fact, based on a hypothesis focusing on that ideational function of metaphor. Yet the interpersonal function is obviously a vital issue in any analysis of the ideological work that metaphor does.

Media Text Media Discourse Conceptual Metaphor Metaphoric Expression Metaphoric Language
These keywords were added by machine and not by the authors. This process is experimental and the keywords may be updated as the learning algorithm improves.

In the Introduction to this book. It was proposed that business media discourse is characterized by coherent conceptual models centring on a WAR metaphor. Such models were regarded as a masculinizing force on both that discourse as well as on related social practices. The hypothesis was tested using a theoretical framework Integrating critical and cognitive approaches to language and discourse. The analysis of two central areas covered by the business media — marketing and M&;A — shows that these discourses are in fact permeated by central conceptual models. These models are. first and foremost, characterized by various forms of dynamic movement in relation to, and aggression against, other entitles In a bounded space. Although they may vary In their degree of hybridity, they arc nevertheless coherent. In both discourses, the war/fighting metaphor proves to be the most frequent, most varied and ultimately most entrenched. In addition, it also turned out that it Is supported by the other metaphors in the cluster, even if these seem contradictory at first (as in the case of the mating metaphor in the M&A cluster). Obviously, such cognitive support must necessarily lie rather subtle, rendering the favoured conceptual model all the more persuasive. In this context. It also showed that alternative metaphors are at best marginal and at worst negligible. What is more, they also tend to he co-opted Into the dominant cluster, leaving little leeway for counter-discursive conceptualizations. War metaphors played a great part in [the seminars]: by definition, we lived in a hostile environment and it was my task to bring forth in the participants that natural aggressiveness which can make them more committed, more efficient and thus eventually more productive.

Even the most cursory glance at any business magazine or newspaper will leave the reader stunned by the abundance of metaphoric language to be found there. Just consider the following random sample:

From hardball pricing tactics that have knocked rivals back on their heels to a capital-spending war chest that’s the largest in telecom, he’s determined to transform what was once just another sleepy phone company into the pacesetter for the industry.

In this summer of corporate love, the unwanted embrace of Pechiney, a French aluminium company, by Alcan, its Canadian rival, could become a thorny romance.

Ready to get swallowed: We found three takeover targets that look appetizing.

MGM’s withdrawal is the latest twist in the long-running battle over the future of Vivendi’s assets.

A great deal of that fascination is accounted for by the multi-functional nature of metaphor. First, there is its important textual function (see Goatly, 1997. pp. 163–4). As realisations of underlying conceptual metaphors, metaphoric expressions

contribute to cohesion of the text while at the same time, the tightness and consistency of the argumentation which results from the structural logic provided by the metaphor… contributes to such an essential textual feature as is coherence.