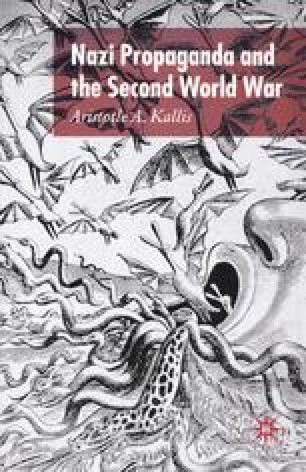 The final act of NS propaganda outlived Hitler and Goebbels. On 1 May 1945, with both of them dead and their bodies burnt as requested, Admiral Karl Dönitz — as the Führer’s designated successor — announced to the Germans that Hitler had died whilst ‘fighting heroically’ to defend the city of Berlin. The Third Reich, Dönitz continued, would continue to fight on, honouring its founder’s legacy and ‘mission’ to defend Germany and Europe from Bolshevism. By that time of course the conflict had been decided — and the German public knew very well that such declarations were a hollow bravado just before the end. On 8 May 1945, Dönitz signed the ‘unconditional surrender’ of NS Germany.

Public Sphere German Public External Development Adverse Psychological Effect Western Norm
These keywords were added by machine and not by the authors. This process is experimental and the keywords may be updated as the learning algorithm improves.
This is a preview of subscription content, log in to check access.