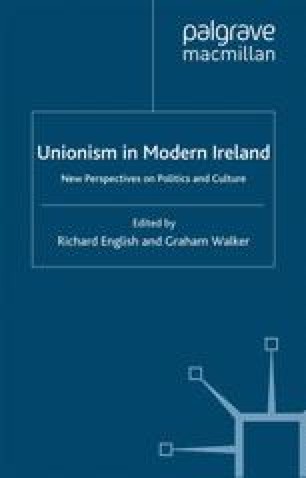 In Search of Order, Permanence and Stability: Building Stormont, 1921–32

Situated on an elevation overlooking the Lagan Valley, above the City of Belfast, an imposing building rises. It stamps its authority on the surrounding landscape and radiates a sense of power and order. For over fifty years the governmental complex at Stormont was the heart of devolved government in Northern Ireland, the symbolic centre from within which Unionist political control was orchestrated. Yet, since Direct Rule was imposed in 1972, the building has ceased to perform the function for which it was originally built. After that, it became the venue for a succession of failed political initiatives which various British governments had attempted to introduce. Serviced by a skeleton staff, until very recently it did not play a significant part in the formal political life of the Province.

Prime Minister Religious Affiliation Great Building Unionist Movement Common Debate
These keywords were added by machine and not by the authors. This process is experimental and the keywords may be updated as the learning algorithm improves.
This is a preview of subscription content, log in to check access.