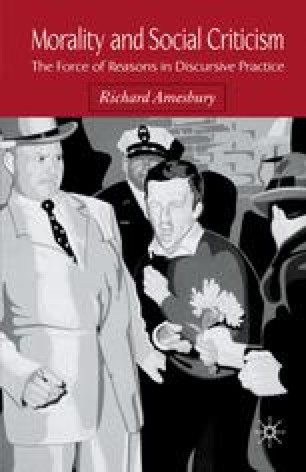 Agreeing to Disagree: Toward a More Capacious Conception of Tradition

Thus far I have been arguing that social criticism — moral, but also the-oretical — requires not that we transcend our practices, but that we remain within them. Contrary to what thinkers like Rorty suggest, the distinctions on which the critic relies are internal to the practices whose “relation to reality” the platonist seeks to get into view. Ironically, it is precisely in attempting to transcend these practices that the platonist risks losing the critical capacity that, it was thought, required the sought-after “external” viewpoint. Thus, in rejecting the platonist’s putative point of view as illusory, we need not relinquish the resources required for rational dissent and critique. In this sense, I have been defending the adequacy of what I called “ordinary” — as opposed to platonistic — realism.

Social Criticism Moral Argument Moral Authority Moral Position Moral Discourse
These keywords were added by machine and not by the authors. This process is experimental and the keywords may be updated as the learning algorithm improves.

So then in questions of theory, truth is the same for everybody, both as to principles and to conclusions … In questions of action, however, practical truth and goodwill are not the same for everybody with respect to particular decisions, but only with respect to common principles; and even those who are equally in the right on some particular course of action are not equally aware of how right they are.