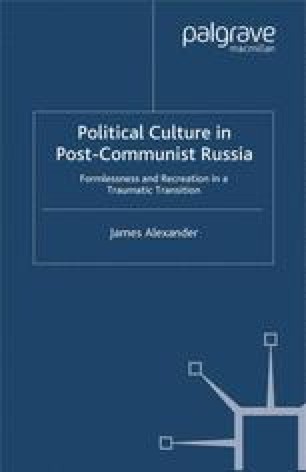 Russian Relations with Authority: the Call for Strength and Unity in Leadership

While 20th-century Russia differs from Machiavelli’s 16th-century Italy, the struggles surrounding the establishment of republican government continue to be relevant. As the unity of the powerful Soviet state has disappeared, many contemporary Russians have reacted against state enforced collectivity. As if old modes of community are anathema, individuals have focused on personal protection and survival to the detriment of the collective society. This has left the construction of the new society to the ambitions of the political and economic elite. Unfortunately, there is neither unity of purpose among the elite, nor agreement on the composition of the society between the elite and the mass public. In looking for a solution, the Russian lack of familiarity with instability found the broadly conservative population searching for stability, generally without ideological concerns, through the reinstitution of some observable form of strong central authority:

for where the body of the people is so thoroughly corrupt that the laws are powerless for restraint, it becomes necessary to establish some superior power which, … with full and absolute powers may put a curb upon the excessive ambition and corruption of the powerful.2

Political Culture Komi Republic Individual Leader Soviet System Representative Institution
These keywords were added by machine and not by the authors. This process is experimental and the keywords may be updated as the learning algorithm improves.

A people that has been accustomed to live under a prince preserves its liberties with difficulty, if by accident it has become free.

Cite this chapter as:
Alexander J. (2000) Russian Relations with Authority: the Call for Strength and Unity in Leadership. In: Political Culture in Post-Communist Russia. Palgrave Macmillan, London. https://doi.org/10.1057/9780230507913_8