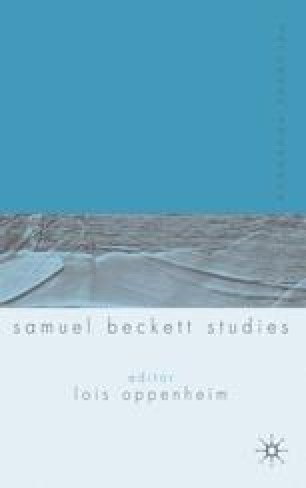 Martin Esslin, author of an acclaimed classic on absurdist playwrighting, noted in his introduction to that 1961 volume that ‘Godot’ had infiltrated into the ‘private language’ of a local population that had viewed Beckett’s play some four years prior. Entire phrases and even characters from the play bearing the name in its title were said to have become a ‘permanent part’ of the spectators’ environment.2 Esslin had no way of knowing just how far from the venue hosting that San Francisco Actors’ Workshop production, the San Quentin Penitentiary(!), the infiltration would extend. Indeed, Waiting for Godot (first published in France in 1952) soon permeated the international theater community to revolutionize playwriting and establish its invisible protagonist as an icon of modernism in the art and philosophy of the Western world.

Universal Variation Workshop Production Permanent Part Private Language Acclaim Classic
These keywords were added by machine and not by the authors. This process is experimental and the keywords may be updated as the learning algorithm improves.

‘This is something I can study all my life, and never understand.’ Molloy1