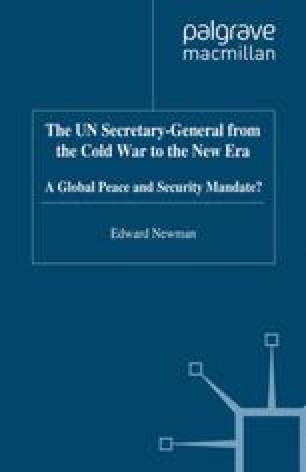 The literature on Lie’s incumbency portrays a man who established a number of important practices and contributed to a positive although precarious development of his Office.1 The development of the Office might have been greater had his style been less robust, for he left in his wake the desire on the part of the permanent members of the Security Council for a more passive successor. Lie felt that his office should be active in pursuit of the interests of the Organization despite the constraints imposed by the Cold War environment. Debate, however, continues regarding the extent to which his assertive style was positive for the Secretaryship-General.

Security Council International Peace Peace Process Collective Security Turkish Community
These keywords were added by machine and not by the authors. This process is experimental and the keywords may be updated as the learning algorithm improves.
This is a preview of subscription content, log in to check access.