Technology Gatekeepers for War and Peace 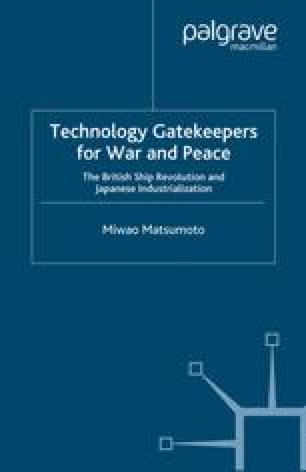 Technology Gatekeepers for War and Peace pp 118-144 | Cite as

‘Spin-off’ in the Nationalization of R&D: The Recasting of the British System in an Industrializing Japan

In sharp contrast with the focus on ‘spin-on’ within the military-industrial-university complex in Chapter 4, this chapter poses the following questions about the ‘spin-off’ process. How did the military-industrial-university complex achieve spin-off and, through that, develop R&D into national organizations? How similar or different were the factors that contributed to spin-off and the development of R&D into national organizations in Britain and Japan? And from the similarities and differences, what general insights can we obtain into the interaction between science, technology and industrial society?

Private Company Industrial Society Social Background Experimental Tank National Research Institute
These keywords were added by machine and not by the authors. This process is experimental and the keywords may be updated as the learning algorithm improves.
This is a preview of subscription content, log in to check access.

Cite this chapter as:
Matsumoto M. (2006) ‘Spin-off’ in the Nationalization of R&D: The Recasting of the British System in an Industrializing Japan. In: Technology Gatekeepers for War and Peace. St Antony’s Series. Palgrave Macmillan, London. https://doi.org/10.1057/9780230504172_5