Religion in the Soviet Union 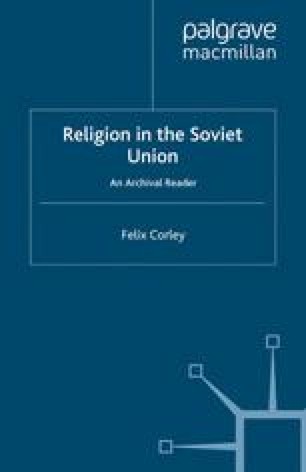 As Nikita Khrushchev gradually gained ascendancy over the other Communist leaders, he instituted a controversial policy of de-Stalinisation, intending to use Stalin’s crimes (in which he had also played a part) as a weapon against his enemies. Hundreds of thousands of political prisoners were freed under amnesty from the labour camps, including many prisoners of war from Italy, Austria and eventually Germany. Rebellions took place in Soviet labour camps, uprisings hit Eastern Europe (the GDR in 1953, Poland and Hungary in 1956) and a mood of expectation of change arose. The de-Stalinisation campaign reached its peak in 1956 with Khrushchev’s famous ‘Secret Speech’ at the closed Twentieth Party Congress. The rumours of his revelations brought further confusion and unrest to Soviet society. But Khrushchev’s erratic policies, which saw the publication in 1961 of Solzhenitsyn’s novel on the labour camps One Day in the Life of Ivan Denisovich, also led to the persecution of Boris Pasternak for publishing his novel Doctor Zhivago in the West.

Executive Committee Religious Cult Catholic Church Socialist Legality Religious Rite
These keywords were added by machine and not by the authors. This process is experimental and the keywords may be updated as the learning algorithm improves.
This is a preview of subscription content, log in to check access.