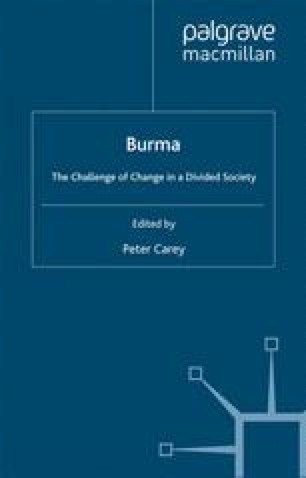 The Civil War, the Minorities and Burma’s New Politics

In the recent history of Burma, two dates stand out: 18 September 1988 and 28 April 1992. On the former, the Burmese army seized power and instituted a military dictatorship, justifying its action by declaring that it was necessary in order to restore order and save the nation from disintegration. On the latter, the military rulers, organised as the State Law and Order Restoration Council (SLORC), ordered a halt to its military operations against the Karens ‘to expedite the attainment of amity among all races for national unity with a view to strengthening national solidarity . . . \ 2 SLORC’s change of tactics was followed a year later by important policy changes in Thailand, which, taken together, had a direct bearing on the civil war. The actions of the two governments were to alter significantly the balance of forces in the civil war and the new politics of Burma.

National Unity Military Ruler National Convention Minority Area National Coalition
These keywords were added by machine and not by the authors. This process is experimental and the keywords may be updated as the learning algorithm improves.
This is a preview of subscription content, log in to check access.