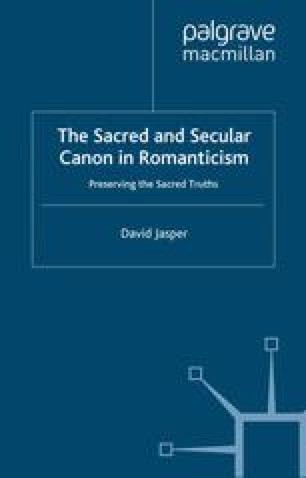 We move now to the particular question of language in Romanticism, and the way in which the inherited language and imagery of the Bible and religion continue to have their effect even when loosened or divorced from a context of belief. Today we have become accustomed, after structuralism and beyond in the tradition of the linguistics of Ferdinand de Saussure, to the notion that all literature is, quite simply, a product of language. From the Ancient Mariner with his ‘strange power of speech’, to the instabilities implied in the Referential Fallacy, to Derrida’s sense – after his reading Rousseau – of the necessary evil of writing (an image straight, of course, from the Bible and its tradition), we derive a sense of the dangerous power of words, a preoccupation which links the anxieties of Romanticism with our own. Above all, the Word of God falls victim to this uncertainty, this energetic freedom of language from our control.1 Under such freedom, texts, too, converse afresh with one another in new anxieties of discourse, and the Bible is by no means exempt from these exchanges. On the contrary, it lies at the heart of the matter.

Religious Language Primary Imagination Poetic Language Biblical Literature Dense Language
These keywords were added by machine and not by the authors. This process is experimental and the keywords may be updated as the learning algorithm improves.

If words are not THINGS, they are LIVING POWERS, by which the things of most importance to mankind are actuated, combined and humanized.