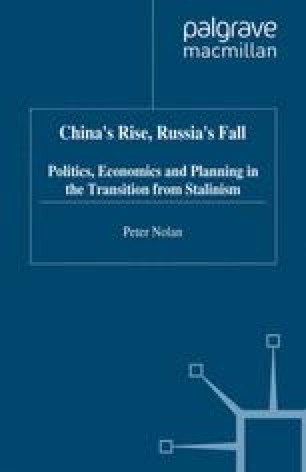 It might be thought odd to write a chapter such as this. There are two reasons for doing so. The central theme of this book is the shortcomings of the orthodox approach to reform of the communist system of political economy. I wish to make it unambiguously clear that I am not implying that the alternative was remaining with the Stalinist system. It needed fundamental reform both in China and in the USSR. The question is not ‘whether’ but ‘how’ and ‘towards what’? Many of those who opposed the wild stampede to the free market in Russia had no illusions about the communist system. Indeed, among the most vociferous critics of the Russian reform strategy were people who had been sentenced to internal exile for opposition to the Stalinist system.

Communist Party Five Year Plan Cultural Revolution Capital Productivity Communist Country
These keywords were added by machine and not by the authors. This process is experimental and the keywords may be updated as the learning algorithm improves.
This is a preview of subscription content, log in to check access.