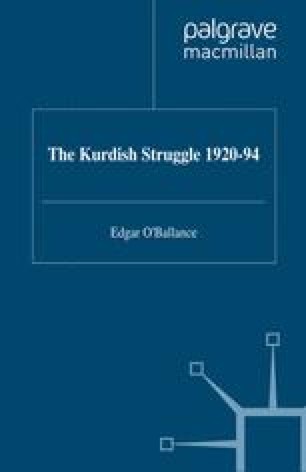 The Kurdish Republic of Mahabad: 1946

The ramifications of the Second World War, which began in September 1939, gradually reached out and drew in Iran (the new name for Persia since 1935) and Iraq. Turkey remained neutral until the last days of this conflict and generally succeeded in keeping a tight rein on its restless Kurds, as did Syria, which was successively under French, Vichy French and then Free French military occupation, and which stifled Kurdish thoughts of dissidence. When the Iraqi government hesitated to join the Allies and seemed to be favouring the Axis powers, a British military force landed in Iraq. By May 1941 it was in Baghdad, establishing itself as the protecting power for the remainder of the war.

Iranian Government Military Occupation Kurdish Region Small Consignment Iraqi Government
These keywords were added by machine and not by the authors. This process is experimental and the keywords may be updated as the learning algorithm improves.
This is a preview of subscription content, log in to check access.