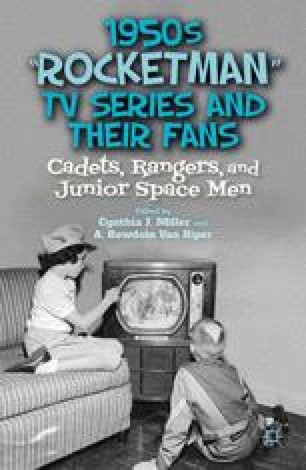 The Sky Is the Limit: Advertising and Consumer Culture in “Rocketman” Television Series of the 1950s

How could the makers of a seemingly ordinary breakfast food make such an astounding (and impossible to prove) claim? When spoken by characters like Tom Corbett, Buzz Corry, or Captain Midnight, virtually any product pitch, no matter how farfetched, retained a strong semblance of truth. This chapter examines advertising embedded in “rocketman” television series of the early 1950s and discusses their social impact. These promotional messages, which were integrated into the shows themselves, as was typical of the time (especially for kids’ programs), were instrumental in establishing an ethos of consumerism among the generation that would one day be known as baby boomers. Consumption was a means to demonstrate one was a valued member of society, these commercials clearly showed, the pursuit of the good things in life that money could buy an essential part of one’s civic responsibility. Wrapping up this ideology in the emerging “space culture” was an especially powerful device, linking the ideas of progress, achievement, success, competitiveness, and leadership to consumerism. Although boomers would soon rebel against this ideology as they explored the possibility of an alternative American way of life, they would come to fully embrace it when they reached positions of power and influence. Finally, I argue that “rocketman” advertising helped to plant the seed of limitless possibilities among Americans, espousing the compelling idea that “the sky is the limit.”

Breakfast Cereal Television Advertising Television Series American Film Corn Flake
These keywords were added by machine and not by the authors. This process is experimental and the keywords may be updated as the learning algorithm improves.

They’re the favorite cereals of the whole world, the whole universe!