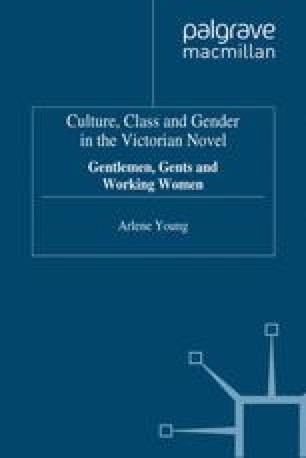 Culture, Class and Gender in the Victorian Novel pp 45-86 | Cite as

The Literary Evolution of the Lower Middle Class: The Natural History of the Gent to Little Dorrit

The gentleman, as Daniel Defoe recognized, is a cultural construction, the ‘exalted Creature of our own forming’. Fictional characters are no less cultural constructions, shaped as much by the values and assumptions of the society for which they are created as by the author who creates them. The cultural values of intensely class-conscious nineteenth-century Britain accordingly dictated that fictional characters must have a class identity, and indeed, a character’s class is arguably a more fundamental personal attribute than gender in the novels of this period. Consider, for example, the androgyny of many omniscient narrators, especially George Eliot’s, for while narrators, strictly speaking, are not characters, they are nevertheless constructed fictional identities, albeit often incomplete ones. The narrator of Middlemarch, while dis-embodied, has so distinct a personality that one critic has been prompted to attribute the pervasive wisdom and discernment of the narrative voice to middle-aged sagacity rather than omniscience. More fundamental, but perhaps less obvious, is that narrator’s middle-class sensibility

Middle Class Literary Evolution Class Identity Class Position Lower Middle Class
These keywords were added by machine and not by the authors. This process is experimental and the keywords may be updated as the learning algorithm improves.
This is a preview of subscription content, log in to check access.