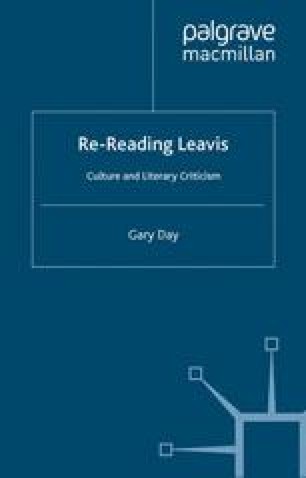 Francis Mulhern suggests that the importance of ‘Mass Civilisation and Minority Culture’1 is that it contained, in embryonic form, Scrutiny’s governing theme: ‘“industrialism” and its destructive effects on society and culture’.2 While it cannot be denied that Leavis’s essay, which originally appeared in pamphlet form in 1930, has some relation to the concerns of Scrutiny, such an observation hardly does justice to either its rhetoric or the complexity of its arguments. Accordingly, my purpose is to address these in some detail in order to show that there is far more to ‘Mass Civilisation and Minority Culture’ than is evident in Mulhern’s account of it.

Mass Civilisation Human Thought Modern Civilisation Minority Culture Book Club
These keywords were added by machine and not by the authors. This process is experimental and the keywords may be updated as the learning algorithm improves.
This is a preview of subscription content, log in to check access.