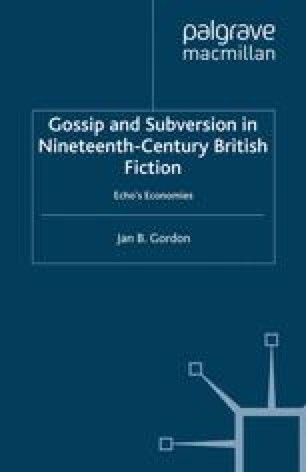 Parlour’s Parler: ‘The Chatter of Tongues Within …’ Wuthering Heights

Our Lockwood first encounters Catherine Earnshaw not as a person, but as a companionable text, the keeper of a diary which is simultaneously ‘like’ his own, yet different, for his writing can enclose hers, becoming in the process a commentary upon it. We glimpse hers only through his. In much the same way her diary is in fact ‘a pen and ink commentary — at least the appearance of one — covering every morsel of blank that the printer had left’ (WH 3, p. 62) in the margins of one of the printed sermons of the Reverend James Branderham, itself a commentary upon a New Testament parable. Manuscript and print are in such close proximity that the drowsy Lockwood’s eyes can wander ‘from one to another’ in the infinite regress of the meta-textual for which the New Testament, itself a commentary upon and amendment of the Old Testament, would be a perfect representation. Texts are inextricably involved with their own alterity. He gains the illusion of his admission to the labyrinthine ‘penetralium’ which he imagines to be a ‘perfect misanthrope’s heaven’ (WH 1, p. 45) at the same time that his own text, the diary begun in 1801, is provisionally admitted to the canon of supplementary, unfinished, written commentaries that inform an imaginary library, as ‘select’ in its own way as Catherine’s own.

Corporeal Punishment Literary Critic Infinite Regress Private Manner Radical Protestantism
These keywords were added by machine and not by the authors. This process is experimental and the keywords may be updated as the learning algorithm improves.

‘I am very scrupulous about an oath. Like is an ill mark.’

… the sensations of nightmare … amongst the most horrible that oppress human nature — an inability to move, during the paroxysm — dreadful visions of ghosts & etc — due attention to diet — and the circumstance of living with the head neither more nor less than on a level with the body, or nearly so … it was worst toward the morning 1838-B… people, when oppressed with the nightmare, groan in their sleep, and should be waked [sic].