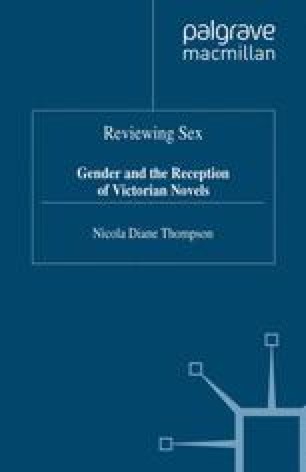 Elaine Showalter’s 1977 work A Literature of Their Own explored, among other things, the Victorian double standard in periodical reviewing, which was particularly strong, she argued, from the 1840s to the 1860s. Women, she wrote, were thought “to possess sentiment, refinement, tact, observation, domestic expertise, high moral tone, and knowledge of female character; and thought to lack originality, intellectual training, abstract intelligence, humor, self-control, and knowledge of male character” (1977, p. 90).1 Carol Ohmann’s 1971 article “Emily Brontë in the Hands of Male Critics” argued that the reception of Wuthering Heights was dominated by sexual prejudice. One of the most recent biographies of Emily Brontë, a 1990 work by Katherine Frank, reiterates Ohmann’s emphasis on a sexual double standard in the reception of Wuthering Heights: “The sex of both Ellis and Currer Bell was almost as important to their early reviewers as the power of their stories. Indeed, a double standard clearly operated in the reactions to the novels” (1990, p. 237).

Double Standard Female Character Sexual Prejudice Gender Schema Sexual Double Standard
These keywords were added by machine and not by the authors. This process is experimental and the keywords may be updated as the learning algorithm improves.

And as a rule, the mass of women writers do write badly… At the first blush, they seem to have many things in their favour. In the first place, they are refined and tender-hearted… No woman would think of letting a character in her novel be a genuine hero who was cruel to flies, or who did not like babies, or who did not hate treading on a snail. Their books have generally a moral purpose …

In the midst of the reader’s perplexity, the ideas predominant in his mind concerning this book are likely to be brutal cruelty and semisavage love. What may be the moral which the author wishes the reader to deduce from his work, it is difficult to say

If we read it [Wuthering Heights] at all, we read in haste, and with a prior sense of repulsion, which dropped a veil between book and reader and was in truth only the result of an all but universal tenor of opinion amongst our elders