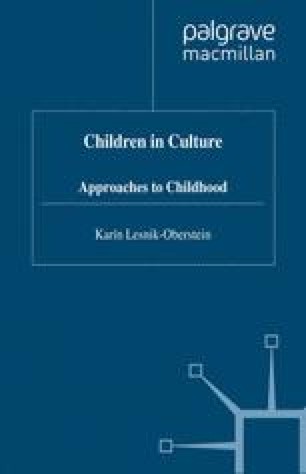 The Season of Play: Constructions of the Child in the English Novel

Childhood and the child are cultural myths replicated and reinvented through representational practices of history, science, literature, material culture, woven in, and by, discourses, or discursive traditions, which inevitably embody priorities, beliefs, the feelings of people, of time and of place. The child I propose to write about is thus mainly a cultural phenomenon, and partly also an ideological construct, and not a ‘real’ child. Being mainly a representation through discourse the child is inseparable from its representation procedures and unattainable with total objectivity. Let me argue further that it is inevitably linked to adult memory processes which aim at retrieving the past. From the moment ‘childhood’ was allowed to exist, that is, to be represented iconographically or discursively as different from adulthood, from the fifteenth to the eighteenth centuries,2 it has been framed — and especially so in the literary milieu — by a powerful tradition of selective and nostalgic recallings by adults of their first years of existence. This tendency became particularly striking towards the end of the eighteenth century when, in the Enlightenment, the child became the object of educational preoccupations and came under closer observation by teachers and parents, and when in Romanticism an ideal of the child as ‘Father to the Man’3 was created; and it has circulated since then, notwithstanding the substitution of this notion of the ‘child of god’ by successive others, which contradict or develop it in some way.

Eighteenth Century Child Character Representational Practice Semantic Figure Psychic Reality
These keywords were added by machine and not by the authors. This process is experimental and the keywords may be updated as the learning algorithm improves.

There is an inhabited silence in 49 Alma Road, in the sense that there are no voices, though there are various sounds. Some of them even pervasive and raucous sounds, which an unconcerned ear might construe as the background din of a sort of silence.