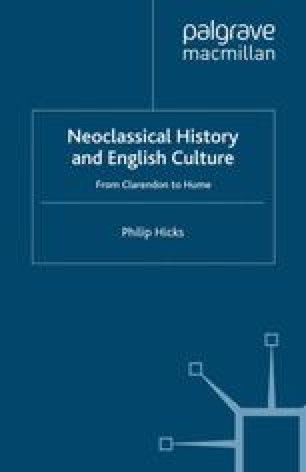 The Death of Thucydidean History

Henry St John, Viscount Bolingbroke (1678–1751), played a vital part in the politics of the eighteenth century, first as a prominent member of the last tory administration before the onset of whig rule, then briefly as a supporter of the Pretender to the throne, James Francis Stuart, and finally as a leader of the opposition to Sir Robert Walpole in the 1720s and 1730s. Bolingbroke and his circle also played a decisive part in the historiography of the age of party. As we have already seen, English history was largely written along party lines, and so whigs and tories scrutinized the past to score political points with partisan historiography. For their part, Bolingbroke and his associates championed the tory peace, which he had negotiated to end the War of Spanish Succession, and the Church of England, which he had campaigned to preserve from endangerment by dissenters and Catholics. In terms of their historiography, tories took a particular interest in guarding the reputation of Clarendon and his History of the Rebellion, whose prestige and political capital they wished to monopolize. They challenged whig initiatives to write the history of their own times, a genre which Clarendon had perfected and which was seemingly reserved for tories alone to pursue.

Political Culture Political Career Political Ambition Contemporary History Literary Project
These keywords were added by machine and not by the authors. This process is experimental and the keywords may be updated as the learning algorithm improves.
This is a preview of subscription content, log in to check access.