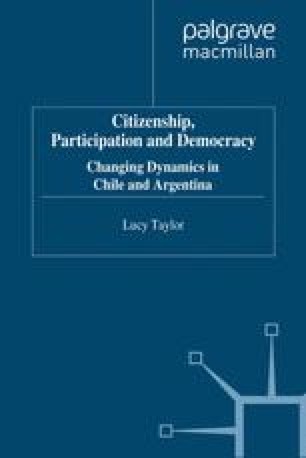 Rights and Sovereignty in Formal Politics

The return to democratic rule in Chile and Argentina heralded the reassertion of representative democratic procedures, constitutional norms and the rule of law. It also heralded the return of elite-led politics and political parties as the vehicles of citizen representation and participation. This was not just a reassertion of the status quo ante, though: in Chile, a new constitution was now in force and the institutions of politics were moulded by Pinochet’s provisions; in Argentina, the initial return to previous citizen/state relations was subsequently disturbed under Menem by constitutional change which defined and altered the status of the citizen and enhanced the potential power of citizen sovereignty. The contemporary political picture reflects elements of continuity and change profoundly linked on the one hand to political culture and on the other to an ideological reworking of the roles of state, political party and citizen.

Political Party Political Culture Political Practice Military Regime Elite Rule
These keywords were added by machine and not by the authors. This process is experimental and the keywords may be updated as the learning algorithm improves.
This is a preview of subscription content, log in to check access.