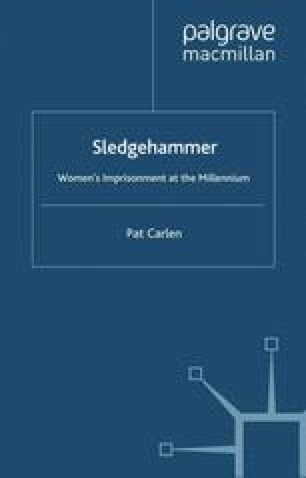 From John Howard to Michael Howard and Back Again

Prison administrators and reformers, as well as many prison campaigners have perennially found it difficult to think of women prisoners as being anything other than ‘not men’. Consequently, discussions of women’s imprisonment have tended to centre around questions about the extent to which the women’s institutions should be different to the men’s, with earlier concerns focusing on the need to protect women’s (or resurrect ‘fallen women’s’) virtue, and later ones emphasizing, on the one hand, women’s rights to equality of treatment and, on the other, the state’s right to exact equal penal dues from both men and women. Despite this central bifurcation, however, it is possible nowadays to trace at least four main interwoven, and difficult to separate, themes within debates about women’s imprisonment.

Prison Population Female Prisoner Male Prisoner Prison Officer Prison Staff
These keywords were added by machine and not by the authors. This process is experimental and the keywords may be updated as the learning algorithm improves.
This is a preview of subscription content, log in to check access.