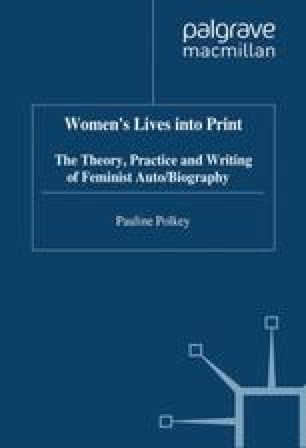 When Writing the Other is Being True to the Self: Jamaica Kincaid’s The Autobiography of My Mother

When asked how much of her work is autobiographical, Jamaica Kincaid’s stock response is ‘All of it, even the punctuation’. However, readers of her work would be well-accustomed to such statements of devious simplicity and complex clarity They would likewise recognise in the title of her latest work, The Autobiography of My Mother (1996), a playful but incisive disturbance in the accustomed use of language. Like the title of this work, two comments which Kincaid has made in interview imply that, for her, the figure of the mother is implicated in the central relationship between writing and the self around which autobiographical works are structured.

My mother used to tell me a lot of things about herself. It’s perhaps one of the ways in which I became a writer. (Kincaid in Bonetti 1992: 127)

Clearly the way I became a writer was that my mother wrote my life for me and told it to me. I can’t help but think that it made me interested in the idea of myself as an object. (Kincaid in O’Connor 1985: 6)

All of Kincaid’s major fictions, to date, have focused on the mother-daughter relationship; a fact which is perhaps more surprising given that she has written in a variety of genres, periods, voices and cultural locations, in order to unravel the politics of colonialism, neo-colonialism and post-colonialism.

Life Story Hegemonic Discourse Bell Hook Voice Pattern Oppressive Conse
These keywords were added by machine and not by the authors. This process is experimental and the keywords may be updated as the learning algorithm improves.