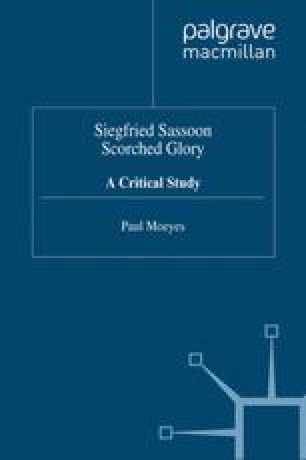 Epilogue A Stranger on Earth

During the last ten years of his life, following his conversion, Sassoon was no longer interested in his posthumous literary reputation, though he felt that it would be by the Sherston Trilogy that he would be remembered: “the war poems (the significant and successful ones) will end up as mere appendices to the matured humanity of the Memoirs” (LC, 14). In June 1965 he received the Honorary Degree of D. Litt. at the University of Oxford. Academic recognition now meant little to the 78-year-old, and he only accepted because he knew it would give pleasure to his friends. The Latin citation (for which David Cecil had been one of the advisors) called Sassoon an eminent artist whose prose works “Commentarii Venatoris Vulpium et Tribuni Peditum” had portrayed “the good qualities of the horse and the senseless barbarities of the war”. Sassoon’s only objection to the speech was that no reference was made to his spiritual journey: “I suppose ‘the world’ was being on the safe side, as usual”.1 This reference to the world outside as an almost alien presence is typical of Sassoon’s state of mind.

Imaginative Power Spiritual Struggle Reading Public Mental Wound Academic Recognition
These keywords were added by machine and not by the authors. This process is experimental and the keywords may be updated as the learning algorithm improves.
This is a preview of subscription content, log in to check access.