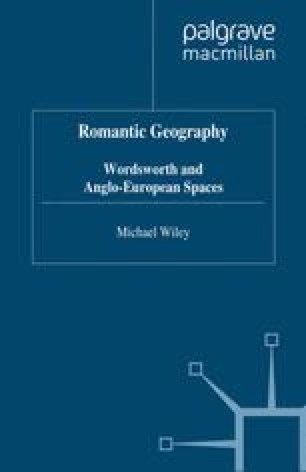 A year and a half after composing ‘Tintern Abbey’ and just days after moving to Grasmere, Wordsworth began writing a series of seven poems which he classified Poems on the Naming of Places. Between the end of December 1799 and October 1800 he wrote the first five, ‘It was an April morning’, ‘To Joanna’, ‘There is an Eminence’, ‘A narrow girdle of rough stones’ and ‘To M.H.’,1 and he published them prominently under a separate title page in the 1800 edition of the Lyrical Ballads. By 1804, he completed a sixth poem, ‘When first I journey’d hither’, which he published as ‘When, to the attractions of the busy World’ in his 1815 Poems; and much later, in 1845, he wrote a seventh, ‘Forth from a jutting ridge’. By looking at ‘It was an April morning’, ‘To Joanna’ and ‘When first I journey’d hither’, I argue in this chapter that the six poems which Wordsworth wrote during his first years back in the Lake District crucially test the kinds of imaginative and memorializing claims upon the British land that he begins to make in ‘Tintern Abbey’ and the more extensive claims that he makes in the 13-book 1805 Prelude. The developmental pattern in most of these six poems is the same. Wordsworth creates a narrative which registers spatial and temporal tensions, and then he ends the narrative abruptly by configuring an alternative, utopian space through the naming or re-naming of a particular site. (‘There is an Eminence’ and ‘When first I journey’d hither’ are exceptions, though parts of the general pattern still appear in them.)

Actual World Lake District Background Reminder Configurative Naming Imagination Passage
These keywords were added by machine and not by the authors. This process is experimental and the keywords may be updated as the learning algorithm improves.
This is a preview of subscription content, log in to check access.