The Trial of Woman 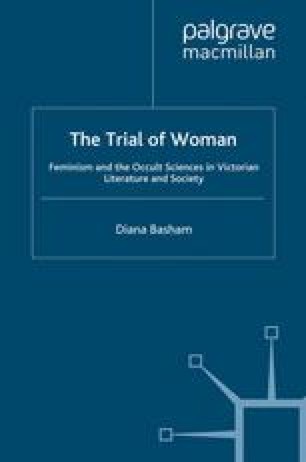 Through the Looking Glass: Madame Blavatsky and the Occult Mother

In the looking glass world of late nineteenth century fiction, the image of one figure repeatedly appears. The image is that of the ‘Occult Mother’ and representations of her are so consistent that we may list her attributes and define her symbolic nature. Whether she appears as Ayesha in both Bulwer Lytton’s A Strange Story (1862) and in Rider Haggard’s She (1887), as Arabella Donne in Hardy’s realist parody, Jude the Obscure (1896),4 as the Duchess of Towers in George du Maurier’s Peter Ibbetson (1892), as Theodora in Disraeli’s Lothair (1870), or as Lewis Carroll’s one-dimensional Queen of Hearts in Alice in Wonderland, the ‘Occult Mother’ with her uncanny transformative power is the ‘Monstrous Dweller on the Threshold’ that tentatively separates literary fiction from occult reality during the last decades of the nineteenth century. As Life began consciously imitating Art, rather than vice versa, in the literary aesthetics of the ‘fin du siecle’, and as occultism in general acquired cultural prominence in the decadent 1890s, the construct of the ‘Occult Mother’ became itself a site for this aesthetic and perceptual realignment.

Secret Society Occult Power Literary Fiction Woman Question Opposing Identity
These keywords were added by machine and not by the authors. This process is experimental and the keywords may be updated as the learning algorithm improves.

On being asked by me, before the seance opened, if she would cause a glass inkstand to move in full light, she replied, in that vulgar speech of hers, ‘And what makes you obstinately stuck on such trifles as that? I can do much more: I can cause you to see your mother. You ought to be thinking of that.’

… After that day the shade of my mother (alas! only too truly a shadow) reappeared at least twenty times during Eusapia’s seances while the medium was in a trance… Cesare Lombroso, ‘Experiments with Eusapia Paladino’ (1909)1

How was it credible that I, a rational man, not unacquainted with the leading scientific facts of our history, and hitherto an absolute and utter disbeliever in all the hocus-pocus which in Europe goes by the name of the supernatural, could believe that within the last few minutes I had been engaged in conversation with a woman two thousand and odd years old?

I cannot help feeling that there was something demoniac in that extraordinary woman.3

Count Witte of Madame Blavatsky in his Memoirs