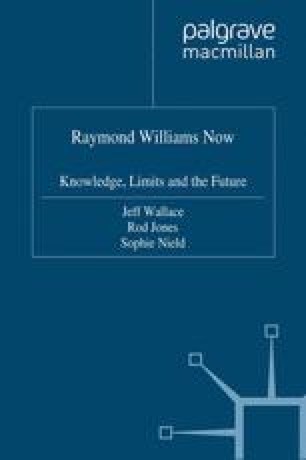 Raymond Williams and the Culture of Televisual Flow

It is my intention in this essay to show that Raymond Williams’s principled interventions into a series of debates concerning the ways in which television is interwoven throughout the cultural fabric of our everyday realities continue to be richly suggestive for research in a wide variety of analytical contexts. Specifically, my aim is to draw upon his writings about television, in general, and on its discursive ‘flow’, in particular, in order to extend a critical reconsideration of what he describes as ‘the normal television experience’. In this way, television as both a technology and a cultural form will be set in relation to the profuse flow of its sounds and images as they are negotiated by the televisual audience on an ordinary, ‘lived’ basis.

Mass Culture Cultural Form Soap Opera Public Service Broadcasting Technological Determinism
These keywords were added by machine and not by the authors. This process is experimental and the keywords may be updated as the learning algorithm improves.
This is a preview of subscription content, log in to check access.