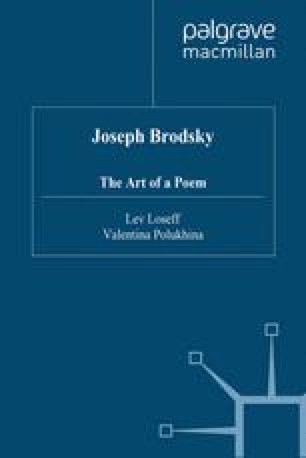 ‘On the Death of Zhukov’

I see columns of stock-still grandsons / the coffin on a guncarriage, the backside of a horse. / The wind here does not carry the sounds to me / of plangent Russian military horns. / I see, in its regalia decked, the corpse: / To death journeys firey Zhukov. / / Warrior before whom fell many / walls, though his sword was blunter than his foes’ / with a brilliant manoeuvre, of Hannibal / reminiscent, mid the Volga steppes. / His final days, solitary, in disgrace / like Belisarius or Pompey. / / How much he spilt of soldier’s blood / in foreign lands! Did he grieve? / Did he remember them as he lay dying in his civilian / white bed? A complete blank.

Foreign Land Stylistic Register Sound Symbolism Stressed Vowel National Hero
These keywords were added by machine and not by the authors. This process is experimental and the keywords may be updated as the learning algorithm improves.
This is a preview of subscription content, log in to check access.