Regulation of the Pharmaceutical Industry 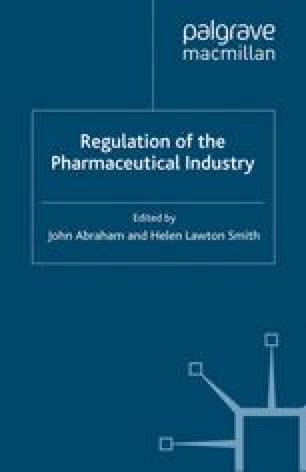 Regulation of the Pharmaceutical Industry pp 11-41 | Cite as

Regulatory Laws and Political Culture in the United States and Germany

Chapter
Part of the Studies in Regulation book series (STUDREG)

By the early 1980s, requirements that new pharmaceuticals undergo pre- market testing to determine their ‘safety’ and ‘efficacy’ were common to most industrialized countries. Yet twenty years later, regulatory decisions concerning the approval or rejection of new medicines still exhibit ‘worlds of differences’ among countries with similar regulatory standards (Dukes, 1986). In order to meet different regulatory expectations, strategies followed by pharmaceutical firms in the invention, testing, and marketing of drugs often display distinctive national patterns. While it is not unusual for a new drug to come out of collaborative research between laboratories on different continents or for clinical trials to be conducted in multiple countries, different approaches to data analysis and risk assessment lead to important variation in regulatory decisions among countries around the globe. Understanding differences in cultures of testing and regulation is essential to crafting productive systems for medical innovation and will be crucial to current efforts at international harmonization across Europe, the United States, and Japan (Abraham, 1997; Kidd, 1996).

Drug Testing Political Culture Regulatory Decision Pharmaceutical Firm Judiciary Committee
These keywords were added by machine and not by the authors. This process is experimental and the keywords may be updated as the learning algorithm improves.
This is a preview of subscription content, log in to check access.

Cite this chapter as:
Daemmrich A. (2003) Regulatory Laws and Political Culture in the United States and Germany. In: Abraham J., Smith H.L. (eds) Regulation of the Pharmaceutical Industry. Studies in Regulation. Palgrave Macmillan, London. https://doi.org/10.1057/9780230372597_2