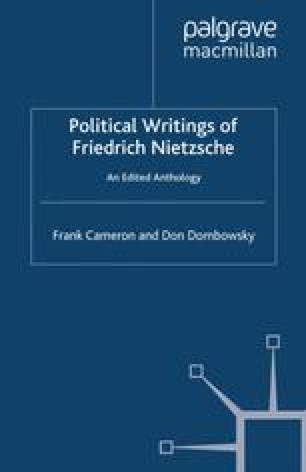 In a letter to Heinrich Köselitz, dated June 20, 1888, five days after the death of Emperor Friedrich III, Nietzsche writes: ‘The death of Emperor Friedrich moved me; in the end he was a little shimmering light of free thought, the last hope for Germany. Now begins the rule of Stöcker; I am drawing the consequences and know already that my Will to Power will now be confiscated in Germany.’1 For liberals of the era, the death of the Emperor after a brief reign of just three months ended all hope for a less repressive political climate in the Reich, for the Emperor had wished to strengthen the parliamentary system. Although anti-liberal, Nietzsche had similar concerns about increasing political repression, but his principal target was the ‘Christian state’ which had recently re-emerged in Germany after nearly half a century in abeyance. Thus Nietzsche’s final year of intellectual activity is marked by his unprecedented ‘Curse on Christianity’,2 including a continuing critique of the political ideologies that share its ‘ancestry’: democracy, socialism, anarchism.3

German Culture Grand Politics Lunatic Asylum Liberal Institution Political Writing
These keywords were added by machine and not by the authors. This process is experimental and the keywords may be updated as the learning algorithm improves.
This is a preview of subscription content, log in to check access.