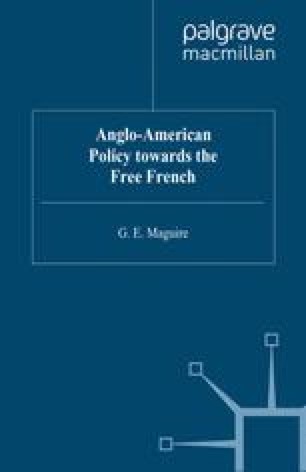 The Anglo-Americans and the Resistance in France

Charles de Gaulle may have been the first resistant, but he was by no means the only one. By June 1944 dozens of resistance movements existed in France and, while most of these had voluntarily announced their allegiance to the alternative French government in Algiers, they still remained largely independent until the arrival of the Allies. It should not surprise us, having seen the slow growth of Free France during the 1940–1942 period, to see the same phenomenon repeated with the interior resistance in France. In 1940 resistance was an isolated act: in Chartres, the prefect, Jean Moulin (later Mercier, Rex or Max) tried to kill himself rather than cover up for the Germans; in Marseille, Henri Frenay-Charvet began to recruit army officers; others hid weapons or distributed essays against the Armistice. However, in general, in 1940 the French people were in a state of shock and embraced Pétain as their saviour. They felt grateful that their leaders, unlike those of Belgium or the Netherlands, had stayed with them and were prepared to endure the occupation with them. It must not be forgotten that the defeat of 1940 had profoundly shaken French society. Memories of the hardships of the previous war had provoked a mass exodus in northern France: approximately eight million persons had fled before the German invader and taken to the roads.

Resistance Group Intelligence Service Resistance Movement French People Resistance Leader
These keywords were added by machine and not by the authors. This process is experimental and the keywords may be updated as the learning algorithm improves.
This is a preview of subscription content, log in to check access.