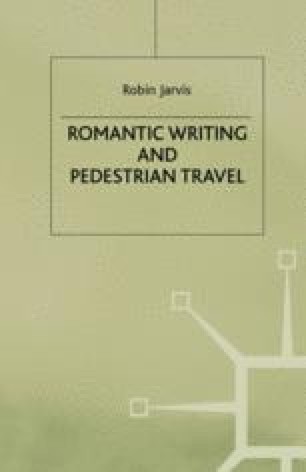 In his own time, Coleridge’s manner of walking was a noteworthy feature of the physical impression he made on others, and there was a temptation to draw intellectual or moral inferences from it. Coleridge himself commented, in a letter to Thomas Poole, on his ‘awkward’ gait, and of its indicating ‘indolence capable of energies’. William Hazlitt remarked upon Coleridge’s habit of crossing from one side of the footpath to the other in front of him, and connected this both with his fluid, digressive conversational style and with his ‘instability of purpose’ or ‘involuntary change of principle’. In Chapter 4 I recalled Hazlitt’s memorable comparison of Wordsworth’s and Coleridge’s habits of peripatetic composition — Coleridge preferring to compose in ‘walking over uneven ground, or breaking through the straggling branches of a copse-wood’. A further familiar anecdote is that of Coleridge’s arrival at Racedown in Dorset (then the home of Wordsworth and his sister) in 1797: Coleridge, Wordsworth later remembered, ‘did not keep to the high road, but leapt over a gate and bounded down the pathless field, by which he cut off an angle’. This recalls a passage in a letter Coleridge wrote to Robert Southey during his pedestrian tour of Wales in 1794: he celebrates the coining of a word by denouncing the ‘circuitous, dusty, beaten high-Road of diction’ in favour of cutting across ‘the soft, green pathless field of Novelty’.1 If body, as Coleridge suggests in a late essay, is ‘but a striving to become mind’, it seems legitimate to take seriously these gestures at linking bodily action, intellectual and moral attitudes or tendencies, and aesthetic form, and this is one aim of the present chapter.

Aesthetic Preference Uneven Ground Habeas Corpus Wood Meadow Final Rest
These keywords were added by machine and not by the authors. This process is experimental and the keywords may be updated as the learning algorithm improves.
This is a preview of subscription content, log in to check access.