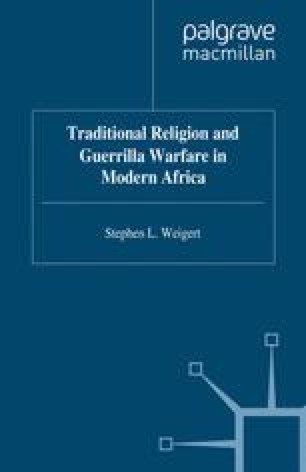 The persistence of insurgency beyond a colonial era into the early years of independence was not unique to Kenya. Insurrection in Cameroon during the mid-1950s and early 1960s grew out of an anti-colonial campaign for independence. This struggle gradually evolved into the militant advocacy of a specific ideology nurtured by the Sino-Soviet camp as the Cold War began to spread to Africa in the late 1950s. For some historians, however, the war waged by the Cameroonian Peoples Union (UPC) between 1955 and the mid-1960s represented the first real attempt at implementing the principles of modern guerrilla warfare in sub-Saharan Africa. According to Basil Davidson, the UPC uprising was an example of a movement based on ‘mass participation’ rather than just ‘mass support’.1 A detailed examination of the insurrection does not necessarily support this conclusion. While Cameroonian insurgents may have espoused a ‘progressive’ secular variant of nationalism, they failed to appreciate the necessity of mobilizing critical elements of the rural population whose traditional values were neither extinct nor dormant. This failure ultimately condemned the UPC to a defeat as certain as that which guerrillas in Madagascar and Kenya faced due to a lack of outside support or rear base areas.

Security Force Secret Society Tribe Member Traditional Religion Nationalist Party
These keywords were added by machine and not by the authors. This process is experimental and the keywords may be updated as the learning algorithm improves.
This is a preview of subscription content, log in to check access.