The Conscience of the Autobiographer 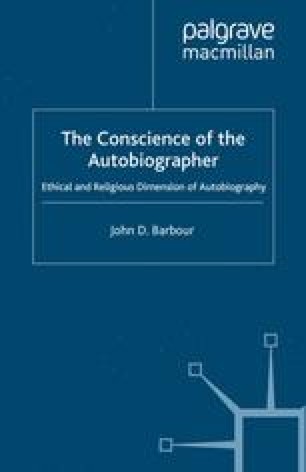 The Conscience of the Autobiographer pp 174-182 | Cite as

Autobiography is not simply a description of how conscience operated in the past, but a searching assessment of the writer’s character in both the past and the present. Thus the writing of autobiography reflects and represents an act of conscience. This thesis has been demonstrated and elaborated through the analysis of a number of autobiographies, especially the works of Montaigne and Samuel Johnson, Benjamin Franklin, Malcolm X, and Mary McCarthy. The moral concerns and the characters of even this select group of autobiographers are so various that one hesitates to make generalizations about the role of conscience in writing about the self. I have been primarily interested in understanding the diverse ways in which individual writers have been influenced by concerns of conscience — for instance, how McCarthy comes to terms with her shame about anti-Semitism, how Franklin reconciles his own self-interest with the welfare of others, or how Malcolm X criticizes racial forms of ressentiment in both his society and his own earlier attitudes. The specific issues and concerns that preoccupy each autobiographer depend on many variable factors in his or her situation and do not set the agenda for every autobiographer. Therefore the sort of conclusions I can offer here are more modest than the grand theories proposed by some critics of autobiography.