Plato on Art and Beauty 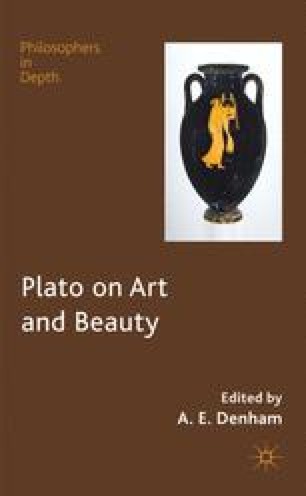 From The Fire and the Sun: Why Plato Banished the Artists

To begin with, of course, Plato did not banish all the artists or always suggest banishing any. In a memorable passage in the Republic (III.398a) he says that should a dramatic poet attempt to visit the ideal state he would be politely escorted to the border. Elsewhere Plato is less polite, and in the Laws proposes a meticulous system of censorship. Scattered throughout his work, from the beginning to the end, there are harsh criticisms, and indeed sneers, directed against practitioners of the arts. This attitude is puzzling and seems to demand an explanation. However, what sounds like an interesting question may merit an uninteresting answer; and there are some fairly obvious answers to the question why Plato was so hostile to art. He speaks in the Republic of ‘an old quarrel between philosophy and poetry’ (X.607b). The poets had existed, as prophets and sages, long before the emergence of philosophers, and were the traditional purveyors of theological and cosmological information. Herodotus (ii.53) tells us that the Greeks knew little about the gods before Homer and Hesiod taught them; and Heraclitus (fr. 57) attacks Hesiod, whom he calls ‘the teacher of most men,’ as a rival authority. Also of course any political theorist who is particularly concerned about social stability (as Plato, like Hobbes, had good reason to be) is likely to consider the uses of censorship. Artists are meddlers, independent and irresponsible critics; literary genres affect societies (Rep. IV.424c) and new styles of architecture bring changes of heart.

Cite this chapter as:
Murdoch I. (2012) From The Fire and the Sun: Why Plato Banished the Artists. In: Denham A.E. (eds) Plato on Art and Beauty. Philosophers in Depth. Palgrave Macmillan, London