The Scale of Interest Organization in Democratic Politics 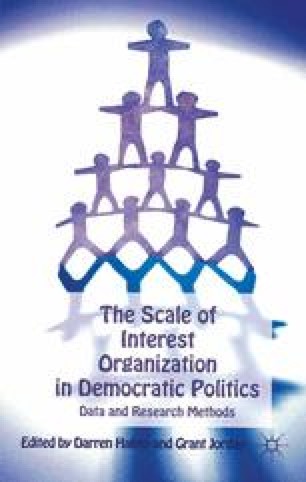 Numbers in a Niche: A Practitioner’s Guide to Mapping Gay and Lesbian Groups in the US

In the mid-1990s I had an idea. Like so many others I have had over the years, it was inspired by Jack Walker’s 1983 article ‘The Origins and Maintenance of Interest Groups in America’. The thought occurred to me that perhaps age was a crucial determinant of the extent to which citizen groups rely upon institutional patrons (e.g., corporations, the government, private foundations) for monetary support. Specifically, I hypothesized (and still believe, incidentally) that older groups rely less upon patronage than younger groups. To test this hypothesis, I set out to map a single interest group sector (rather than compare groups across sectors)1 and then determine the extent to which each group within the sector relied upon institutional patronage in a given year. The plan was to use tax forms and annual reports, hoping to find a negative correlation between age and extent of reliance upon institutional patrons. The sector selected was the population of nationally active gay and/or lesbian rights interest groups in the United States. This choice was driven by the sector’s manageable size – big enough to allow comparisons, but small enough to make data gathering reasonable. Some sectors – the environmental group sector comes to mind – were too big to study; gathering data on so many groups would take too long. Several others – the sector of pro-gun groups, for example – appeared to be too small to allow comparisons. After the National Rifle Association (NRA) there are very few nationally active groups.

Interest Group Historical Account Vital Event Incentive Theory Population List
These keywords were added by machine and not by the authors. This process is experimental and the keywords may be updated as the learning algorithm improves.
This is a preview of subscription content, log in to check access.

Cite this chapter as:
Nownes A.J. (2012) Numbers in a Niche: A Practitioner’s Guide to Mapping Gay and Lesbian Groups in the US. In: Halpin D., Jordan G. (eds) The Scale of Interest Organization in Democratic Politics. Interest Groups, Advocacy and Democracy Series. Palgrave Macmillan, London. https://doi.org/10.1057/9780230359239_5